It never ceases to amaze me how, with 15 minutes’ worth of internet search, a person can uncover a treasure chest of knowledge that you never knew existed. As I’ve traveled through tangled labyrinths of suppressed history and elite priesthoods, one thing has always remained constant: the truth was always lying there, ready to be found, ready for somebody to simply lift the lid and JUST LOOK.

In Part One of this Antarctica saga, we scratched the surface of the mysteries of our most southern continent. We were left hanging with an introduction to the expedition — or rather, invasion — codenamed Operation Highjump. The massive undertaking was led by Rear Admiral Richard E. Byrd Jr. exactly 70 years ago this month. By the way, let’s get this little factoid out in the open: Admiral Byrd was a member of the Freemasons. And not just any Freemasonic Lodge, but THE Freemasonic Temple of Temples, the one located in Washington D.C. Hold that under your hat for later.

I had heard of Operation Highjump but had never paid much attention to it. I knew Admiral Byrd was the decorated American who is credited with exploring so much of the South Pole. And that’s about where my knowledge of the subject ended. I wasn’t too excited about it. This is like picking up a lone, stray puzzle piece off the floor and your response is, “Meh, that’s pretty. Ok, let’s go do something else.”

As anybody who has ever completed a jigsaw puzzle knows, the fascination and the obsession over the completion of the picture grows once you start interlocking a handful of those stray puzzle pieces. And I can already see that this same thing is beginning to happen over the question of “What, oh what, is going on in Antarctica?”

To begin at the beginning, would it surprise you to learn that, once again, we turn our attention to those “voices from the dust,” as author David Astle liked to put it. Redundantly, all roads lead to Babylon.

A MAP THOUSANDS OF YEARS OLD

Like a plot point from a Nicholas Cage movie, the mystery swirls around A MAP. Here is our first, undisputed link in the evidence chain: an ancient map that was –ahem!– “discovered” in 1929 by German theologian Gustav Adolf Deissmann and soon drew the attention of American professor, Charles Hapgood, now famous for his “pole shift” theories. Hold that year on the back burner of your brain because it will play a huge role in the next blog that I will write about Antarctica. (Yes, this is starting to turn into a drama series.) 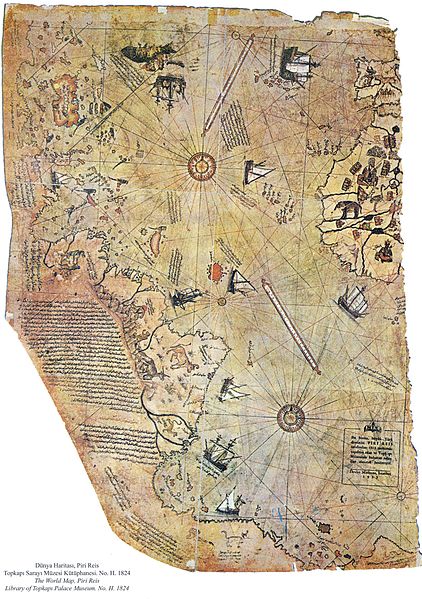 I write “discovered” in quotes because 1929 saw the second, or possibly third or fourth or who knows, “discovery” of the map. The map itself was well known in elite circles no later than the days of Christopher Columbus. For that history, we turn to two books written by Joseph P. Farrell.

It is vital that we understand WHO had this map and WHEN they had it before we can understand the esoteric interest that the Nazi Party held in this map as the storm of WWII began to brew in 1930. In fact, I will let you chew on this history data point that will be discussed in the next blog:

Mainstream history teaches us that the first sovereign state that Hitler invaded as he launched World War II was Poland, on September 01, 1939. But this is not true. The first territory that Hitler assumed control of was Norway’s claim on the northern coast of ANTARCTICA earlier that very same year of 1939! All of this happened about ten years after the re-discovery of the Piri Reis map in 1929.

The above-mentioned books by Joseph P. Farrell tell the story of this singular map. Mr. Piri Reis was an Ottoman Turkish Admiral who lived around the years 1465-1555 A.D., which makes him a contemporary of Christopher Columbus. It is known that the good admiral claimed to have based his map on Columbus’s copies. The map that is named after this Turkish explorer has caused such a stir because it shows that the continent of Antarctica was well known in the ancient world and that continent is presented on the map with amazingly accurate coastal contours. But the real shocker is this: the map shows contours as the continent would have appeared before it was covered with ice! So how long ago would THAT be? It is presumed that Antarctica has been covered with ice for 12,000 years (or about half of one Mayan Calendar precessional cycle – just google the phrase “precession of the equinoxes.”)

In his research, Dr. Farrell discovered that the Piri Reis map is not the only one that shows an ice-free Antarctica. We know that that there are maps that date back even earlier, at least to 1339 A.D. These maps comprised the “portolanos” that were being used by European navigators. Naturally, here is the next question: Where did these maps come from?

Here I will quote the “Vipers” book beginning at page 196 and, as usual, anything within [brackets] are my own interpolations:

We speculated there [in Chapter Two] that the presence of the Byzantine humanists Bessarion and Plethon among the Greek delegation to the council [of Medici banksters] was the contact point for the Florentine merchants who may have been seeking lost knowledge that could only have come from the imperial archives of the East Roman Empire in Constantinople…. [by the way, it is my opinion that the Eastern Orthodox connection to these ancient maps may comprise part of the reason for why Patriarch Kirill was called to Antarctica in 2016.]

It seemed as though somebody early in the 14th century [so, as early as the year 1301] had found an amazingly good chart which nobody was able to improve upon for two hundred years…. Hapgood notes that Nordenskiold believed that these measures were derived from Carthaginian and Phoenician sources….

Then the medieval portolanos [naval maps], exemplified in the Dulcert portolano [the Antarctica map that pre-dates even the Piri Reis map], must represent some hidden tradition of secret knowledge, handed down from High Antiquity and antedating even Ptolemy and the renowned library of Alexandria [!!]

Dr. Farrell goes on to explain a technical feature related to the latitude and longitude positions of the ancient maps. The later Piri Reis map — for all its accuracy — was off by some 4.5%. Dr. Farrell then says, “When Piri Reis’ map was redrawn with this correction [related to the true circumference of the earth], an astounding thing resulted, one with profound implications.”

It could only mean that the Greek geographers of Alexandria, when they prepared their world map using the circumference of Eratosthenes, had in front of them source maps that had been drawn without the Eratosthenian error, that is, apparently without any discernible error at all … suggesting that the people who had originated the maps possessed a more advanced science than that of the Greeks [!!] [page 201] The implication from this is that the 360-degree circle and the twelve-wind system were ancient before the rise of Babylonia and long before Tyre and Sidon were built by the Phoenicians. Babylonian science was thus, perhaps, a heritage from a much older culture. [!!]

Holy Moly. What Dr. Farrell is saying is that a body of secret knowledge — a body that includes far more than just some old map — has been carefully handed down and protected by an interlocking network of secret societies and fortified temples for thousands and thousands of years. And by “fortified temple,” we must, of necessity include that great temple in Rome — the Vatican.

WHAT DID THE POPE KNOW AND WHEN DID HE KNOW IT?

The picture that our jigsaw is beginning to form is that every elitist and his grandma knew about Antarctica as recently as one thousand years ago. This is why I softly chuckle to myself everytime I see some new Internet claim about the sudden “revelations” of pyramids and hidden cities. Read my lips: the Babylonian Bankster Priesthood has known all about this for a long, long time. 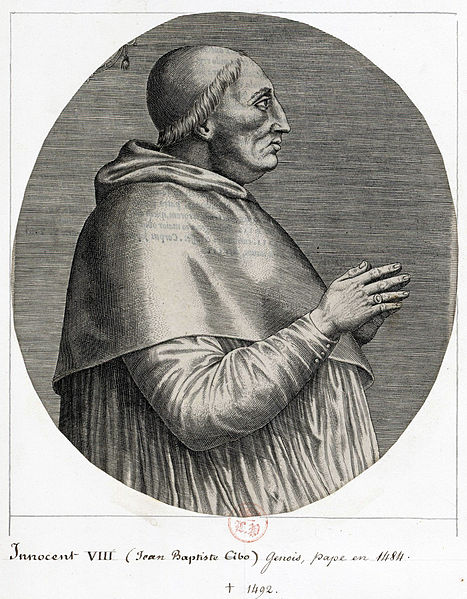 In the other Joseph Farrell book that I mentioned above, “Thrice Great Hermetica,” we get a clue about this on page 134. As far back as the year 1000 A.D., or nearly 100 years before the formation of the Knights Templar, the monk who would come to be known as Pope Sylvester II was making statements to the effect that he hoped that France “would recover the holy places so that a search could be made for the keys to Universal Understanding hidden there.” This future-pope was well known in his day “as the foremost student of esoterica.” He had been educated in a Moorish university in Morocco and thus was well acquainted with what would soon be called the Hermetica and the Kabbalah, two related systems of ideology that were well on their way in his day.

This book by Dr. Farrell lays out a compelling story that shows how “undercover” agents of the Knights Templar, officially disbanded in the year 1307 A.D., re-grouped and were still operating a mighty mercenary navy and a supreme intelligence and banking network by the time Pope Innocent VIII arrived on the papal scene in 1484 A.D. He was the reigning pope at the time Columbus, and his predecessors, the Zeno Brothers, made their many secret voyages to the New World long before the publicly known expedition dated in 1492. It is thought that these maps of the New World, with accurate renditions of Antarctica, had been known within the intel circles for 300 years prior to the known voyage in 1492.

Giovanni Battista Cybo, Knight Hospitaller, son of a Jew, and nephew of a Moslem, who had clear alchemical and thus Hermetic interests, who was one of two Knight candidates for the papacy in 1484, was also the father of no less than sixteen children, one of whom was Christopher Columbus, whose caravels boldly displayed the red cross on a white background, the emblem of the Templars, on their sails…. This means that the military orders, and their financial allies Genoa and Venice …, were backing a project to reveal the existence of a secret that they had known for some time, and that this was done once they had secured the papacy.

On page 170, Dr. Farrell further sums what we have here:

The voyage of Columbus … thus takes on crucial significance in the huge operational complex that has been unfolding, of the struggle between international papal and ecclesiastical power, and the international financial and “hermetic” order represented by the militant Orders and the Italian city-states and banking centers of Genoa and Venice.

Flipping back to the “Vipers” book, Dr. Farrell equally concluded on page 205:

Consequently, one sees two familiar patterns — the first appearing in ancient times, and continuing into modern times — of a financial elite that is a) actively seeking ancient sources of information, and b) seeking to monopolize and suppress it, lest that knowledge break out of the closed system of finance that made their power, position, and prestige, possible.

Hmmm, “financial, Hermetic, and militant orders” … financial elites who monopolize and suppress all avenues of powerful knowledge. Now, just whom does that remind you of only 400 years later in the 20th century? Why, none other than the Nazi Party, their funding Banksters, and whatever name their 21st century oligarchical descendents call themselves. You couldn’t ask for a more complete representation of an uber-powerful force that combined the best of Technocracy, Militarism, and Esoterica. In the year 1929 they became aware of the same thing that the Popes, Christopher Columbus, and all the other post-Knights-Templar mercenaries were well aware of ….

That there’s something under the ice in Antarctica that provides the key of knowledge about the lost human and human-hybrid civilizations that are spoken of by both Biblical and Pagan sources of history.