While governments around the world are told to “tighten their belts”, economies contract and the myth of scarcity (root word: scare) encourages a race to the bottom for the global masses. Alongside these calls for austerity, a historical concentration of power continues among the well-fed and fueled global elite.

The Rockefeller/Rothschild energy cartel and tax-dodger oil traders in Zug, Switzerland have spread well the lie of peak oil. Both know full well that while oil hovers near $100/barrel on the international casinos, oil companies pay around $18/barrel to get crude out of the ground. Big Oil will soon ring up its usual quarterly record profit, while speculators led by Goldman Sachs and Morgan Stanley tack on another $50/barrel before the people get gouged at the gas pump.

In April 2011 the US Department of Energy reported that the main US oil storage depot at Cushing, Oklahoma was holding 41.9 million barrels of crude oil, very near its capacity of 44 million barrels. In other words, the US is awash in crude oil. We are now a net exporter and yet oil prices remain high.

Around the same time the USDA announced that South Dakota farmers planned to plant an additional 850,000 acres of corn- the most since 1931. According to a March 10, 2011 bulletin from USDA, Brazil’s corn crop was 2 million tons higher than last year. Yet corn futures on the Chicago Mercantile Exchange traded at record prices. Food prices are high for the very same reasons – concentration and speculators.

Read more: The Rothschild Bloodline: One of the 13 Satanic Bloodlines that Rule the World

According to the same USDA report, “U.S. wheat ending stocks for 2010/11 are projected higher this month on reduced export prospects. Projected exports are lowered 25 million bushels with increased world supplies of high quality wheat, particularly in Australia, and a slower-than-expected pace of U.S. shipments heading into the final quarter of the wheat marketing year.” Yet wheat futures hover near record highs.

There is nothing alarming in the report about supplies of beef, poultry, eggs, milk, sugar or rice either. Yet food prices continue to skyrocket.

The global elite know that both food and energy are paramount to life. Control over these two most basic needs means control over people.

After the 2008 acquisitions of Swift, Smithfield and National Beef Packers by Brazilian meat-packer JBS, there are three conglomerates that control over 80% of beef-packing in the US – Tyson, Cargill and JBS. These same companies control most of the burgeoning cattle feedlot industry centered in SW Kansas and SE Colorado. They also dominate the pork, chicken and turkey industries. Cargill is the largest grain processor on the planet, handling a full one-half of global grain supplies.

Four giant companies are making a play to own not just all the oil, but virtually all energy sources on the planet. In my book, Big Oil & Their Bankers… I dub them the Four Horsemen – Royal Dutch/Shell, Exxon Mobil, Chevron Texaco and BP Amoco.

These companies control crude oil from the Saudi well-head to the American gas pump and profit from every step of processing, shipping and marketing in between. While reactionary Republicans blame environmentalists for the lack of US oil production, it was these oil giants who capped permitted wells in Texas and Louisiana and moved production to the Middle East – where Bangladeshi, Filipino and Yemeni workers are paid $1/day to work the oil rigs.

Royal Dutch/Shell and Exxon Mobil are the heaviest and most vertically integrated of the Four Horsemen. These behemoths have led the charge towards horizontal integration within the energy industry, investing heavily in natural gas, coal and uranium resources.

With the fall of the Berlin Wall, Eastern Europe, Russia, the Balkans and Central Asia were opened to Big Oil. According to Kurt Wulff of oil investment firm McDep Associates, the Four Horsemen, romping in their new Far East pastures, saw asset increases from 1988-94 as follows: Exxon Mobil-54%, Chevron Texaco-74%, Royal Dutch/Shell-52% and BP Amoco-54%. The Rockefeller/Rothschild Oil Cartel had more than doubled its collective assets in six short years.

In the US retail natural gas sector Chevron Texaco owns Dynegy, while Exxon Mobil owns Duke Energy. Both were key players – alongside Enron – in the 2000 natural gas spikes that battered the economy of California and led to the bankruptcy of that state’s main utility provider, Pacific Gas & Electric. Exxon Mobil has extensive interests in power generation facilities around the world including full ownership of Hong Kong-based China Light & Power.

During the 1970s Big Oil invested $2.4 billion in uranium exploration. They now control over half the world’s uranium reserves, key to fueling nuclear power plants. Chevron Texaco and Shell even developed a joint venture to build nuclear reactors.

Exxon Mobil is the leading coal producer in the US and has the second largest coal reserves after Burlington Resources, the former BN railroad subsidiary which in 2005 was bought by the DuPont family-controlled Conoco Phillips. Royal Dutch/Shell owns coal mines in Wyoming through its ENCOAL subsidiary and in West Virginia through Evergreen Mining. Chevron Texaco owns Pittsburgh & Midway Coal Mining.

Seven of the top fifteen coal producers in the US are oil companies, while 80% of US oil reserves are controlled by the nine biggest companies. Both Royal Dutch/Shell and Exxon Mobil are hastily buying up more coal reserves.

Concentration of power across the energy spectrum is not limited to the US. In Columbia, Exxon Mobil owns huge coal mines, BP Amoco owns vast oilfields and Big Oil controls all of the country’s vast non-renewable resources. In 1990 Exxon Mobil imported 16% of its US-bound crude from Columbia.

The Four Horsemen have invested heavily in other mining ventures as well. Shell holds long term contracts with several governments to supply tin through its Billiton subsidiary, which has mines in places like Brazil and Indonesia, where it is that country’s largest gold producer. Billiton merged with Australia’s Broken Hill Properties to become the world’s biggest mining conglomerate – BHP Billiton.

BP Amoco, through its ARCO subsidiary, has become one of the world’s top six producers of bauxite, from which aluminum is derived. It has mines in Jamaica and other Caribbean nations.

Chevron Texaco controls over 20% of the huge AMAX mining group, the leading producer of tungsten in the US with extensive holdings in South Africa and Australia.

Exxon Mobil owns Superior Oil and Falconbridge Mining, Canada’s largest producers of platinum and nickel, respectively. Exxon also owns Hecla Mining, one of the world’s top copper and silver producers, and Carter Mining, one of the top five phosphate producers in the world, with mines in Morocco and Florida. Phosphates are needed to process uranium, while phosphoric acid is key to petrochemical production, which the Four Horsemen also control.

Another vehicle for Four Horsemen hegemony in the energy sector is the joint venture. For decades before Chevron merged with Texaco in 2001, the companies had marketed petroleum products in 58 countries under the Caltex brand. They also operated Amoseas and Topco as joint ventures before merging.

Exxon and Mobil also shared many joint ventures around the world prior to their 1999 merger, including PT Stanvav Indonesia. Royal Dutch/Shell and Exxon Mobil established a North Sea joint venture called Shell Expro in 1964, while in 1972 Shell tied up with Mitsubishi in Brunei to supply oil to Japan.

In Iran, Iraq and Libya these cartels were nationalized. That’s why the Rockefeller/Rothschild Oil Cartel billed US taxpayers to invade Iraq and Libya, while continuing to threaten Iran. The first oil contract in Iraq went to Royal Dutch/Shell. The 2nd goes to BP and the 3rd to Exxon Mobil. You get the picture.

Both food and energy are paramount to life. That’s why Congress should shut down speculator casinos like the Chicago Mercantile Exchange and the NYMEX, while nationalizing the Four Horsemen and the monopoly food processors. We should form a US Energy Company and a US Food Processing Company which would focus on renewable energy and a healthier diversified diet, respectively.

All things are possible if we show political will and are not scared. We should reject “peak oil” and its attenant myth of food scarcity and tackle the real problems – concentration of corporate power and speculation. 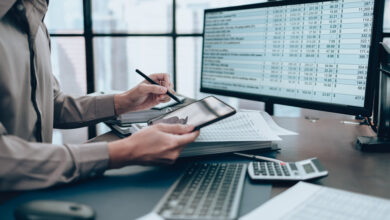 How To Ensure Your Expense Reports Are Accurate – 2022 Guide What is a Severance Package? How To Set Up Your Stock Trading Computer