Contrary to popular belief, it is not uncommon for archaeologists to find old items that seem to indicate a level of technology that, according to mainstream science, should not yet exist at the point in time in which they are carbon dated to.

These are called ooparts (out of place artifacts) and unfortunately, more often than not, they are thoroughly studied but then forgotten.

Could this be done purposefully? Science may seem forever extensive but apparently it’s not advanced enough to answer the puzzles that ancient civilization’s inadvertently left behind.

So now we come to the very interesting part: The Dorchester Pot. This pot is a an exquisite metal vessel measuring 4.5 inches in height and 6.5 inches in diameter.

It displays a geometrical design in which brilliant silvers are embossed. It would take great skill and attention to create something this beautiful. However the main reason that The Dorchester Pot is such a big source of mystery and attention is not simply because it is such a stunning piece of work.

The first point of contention about the pot is where or how it was located before it was discovered. As the name suggests, this was found in Dorchester in 1852. The pot was blasted off into two pieces during the explosion that destroyed the Roxbury Conglomerate. 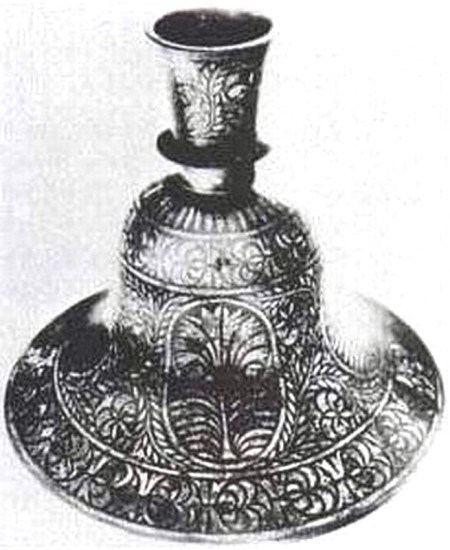 The argument here is that the pot was embedded into the pudding-stone inside of a rock or boulder. A few American Scientific Articles originally published strong suggestions to support these claims.

The current and most boring theory with regards to the Dorchester Pot is that it is a candlestick holder utilized during the Victorian Era.

This Era is known to be one of the most luxurious in history so it is not actually surprising to find elegant household items designed with silver. As to the way of the Pot’s discovery, they argue that the people who found the item were mistaken.

They say it is very probable that the Pot didn’t come from amid the rock and was simply in the rubble following the explosion.

What is the Mystery?

As mentioned, oopart is an item that seems to be made from the time in congruent with the technology making it. To make this more understandable and to give an analogy: you would not expect to find a mobile phone during the Victorian Era, right?

Because during that time, the technology to make mobile phones was non-existent – so this is in essence what oopart is all about.

But then, the technology to make exquisite silver items was not available during that time.

Just a little background history here: according to studies, the earth only contained simple animals around 600 million years ago.

Simple animals refer to water life forms with just a front and a back. According to our history, humans only appeared on earth roughly 250,000 years ago. So by all the accounts, The Dorchester Pot should not ever come close to existing 500 million years in the past!

Of course, let us not forget the actual design of the Dorchester Pot which features a type of plant that according to botanists, has disappeared from Earth over 100,000 years ago.

That does not exactly narrow down the timeline since the pot could still be made 500 million years ago.

Michael Cremo is a popular Hindu creationist and according to him, the existence of the pot does prove that there were metal workers more than 600 million years ago in North America where the item was found.

Others theorize that the Dorchester Pot is actually the creation of an ancient civilization that happened before the Noachian Flood.

In case you are wondering why that sounds familiar, that is essentially what the Bible describes as “Noah’s Flood”. The theory is that the flood really happened but it did not encompass the whole earth.

Of course, do not forget the theory published in Scientific American which was the first paper that actually recognized the item. According to them, The Pot was possibly owned by Tubal Cain who happens to be the Ancestor of Cain from the Bible.

It further suggests that Tubal Cain was a metal worker and perhaps had a hand in creating the artifact itself. Of course, there is always chance that this is mere speculation on the part of the writer.

Thanks to the dissenting facts on the Dorchester Pot, there are numerous theories attributed to its existence.

The contemporary one is mentioned above wherein experts suggest that it could be a candlestick holder. The shape and dimensions of the pot certainly fit the general pipe holder design back in the days.

Others speculate that the Pot is indeed the product of an old civilization that had the technology as well as capacity to create something this exquisite.

Following this theory, there is an argument that life on Earth simply follows a cycle and once the peak is reached, it degrades only to rise up again and grow.

Essentially, the Dorchester Pot is the alleged relic of an old civilization that already reached its peak, 600 million years ago.