Our solar system is passing through a cloud of interstellar material that shouldn’t be there, astronomers say. And now the decades-old Voyager spacecraft have helped solved the mystery.

The cloud is called the “Local Fluff.” It’s about 30 light-years wide and holds a wispy mix of hydrogen and helium atoms, according to a NASA statement released today. Stars that exploded nearby, about 10 million years ago, should have crushed the Fluff or blown it away.

So what’s holding the Fluff in explace?

“Using data from Voyager, we have discovered a strong magnetic field just outside the solar system,” explained Merav Opher, a NASA Heliophysics Guest Investigator from George Mason University. “This magnetic field holds the interstellar cloud together [“The Fluff”] and solves the long-standing puzzle of how it can exist at all.”

The Fluff is much more strongly magnetized than anyone had previously suspected,” Opher said. “This magnetic field can provide the extra pressure required to resist destruction.”

Opher and colleagues detail the discovery in the Dec. 24 issue of the journal Nature.

NASA’s two Voyager probes have been racing out of the solar system for more than 30 years. They are now beyond the orbit of Pluto and on the verge of entering interstellar space. During the 1990s, Voyager 1 became the farthest manmade object in space.

The Voyager craft, racing in opposite directions, have revealed among other things that the bubble around our solar system is squashed.

“The Voyagers are not actually inside the Local Fluff,” Opher said. “But they are getting close and can sense what the cloud is like as they approach it.”

The Fluff is held at bay just beyond the edge of the solar system by the sun’s magnetic field, which is inflated by solar wind into a magnetic bubble more than 6.2 billion miles wide (10 billion km). Called the “heliosphere,” this bubble protect the inner solar system from galactic cosmic rays and interstellar clouds. The two Voyagers are located in the outermost layer of the heliosphere, or “heliosheath,” where the solar wind is slowed by the pressure of interstellar gas.

Voyager 1 entered the heliosheath in December 2004. Voyager 2 followed in August 2007. These crossings provided key data for the new study.

Other interstellar clouds might also be magnetized, Opher and colleagues figure. And we could eventually run into some of them.

“Their strong magnetic fields could compress the heliosphere even more than it is compressed now,” according to NASA. “Additional compression could allow more cosmic rays to reach the inner solar system, possibly affecting terrestrial climate and the ability of astronauts to travel safely through space.”

Ribbon at edge of our solar system: Will the Sun enter a million-degree cloud of interstellar gas? 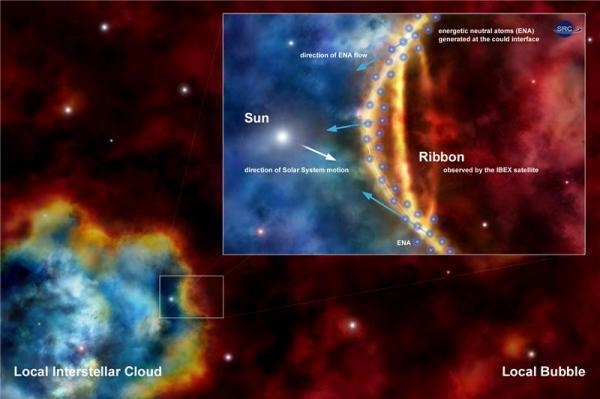 Is the Sun going to enter a million-degree galactic cloud of interstellar gas soon? A U.S.-Polish team of scientists suggests that the ribbon of enhanced emissions of energetic neutral atoms, discovered last year by the NASA Small Explorer satellite IBEX, could be explained by a geometric effect due to the approach of the Sun to the boundary between the Local Cloud of interstellar gas and another cloud of a very hot gas called the Local Bubble. If this hypothesis is correct, IBEX is catching matter from a hot neighboring interstellar cloud, which the Sun might enter in a hundred years.

Scientists from the Space Research Centre of the Polish Academy of Sciences, Los Alamos National Laboratory, Southwest Research Institute, and Boston University suggest that the ribbon of enhanced emissions of energetic neutral atoms, discovered last year by the NASA Small Explorer satellite IBEX, could be explained by a geometric effect coming up because of the approach of the Sun to the boundary between the Local Cloud of interstellar gas and another cloud of a very hot gas called the Local Bubble. If this hypothesis is correct, IBEX is catching matter from a hot neighboring interstellar cloud, which the Sun might enter in a hundred years.

First full-sky maps of the emissions of energetic neutral atoms (ENA), obtained last year by IBEX, showed a surprising arc-like feature called the Ribbon. This astonishing discovery was later announced by NASA as one of the most important findings in space exploration made in 2009. Shortly after the discovery six hypotheses were proposed to explain the Ribbon, all of them predicting its relation to processes going on within the heliosphere or in its neighborhood. In a paper recently published in the Astrophysical Journal Letters, a Polish-US team of scientists led by Prof. Stan Grzedzielski from the Space Research Centre of the Polish Academy of Sciences in Warsaw, Poland, offers a different explanation. “We observe the Ribbon,” says Grzedzielski “because the Sun is approaching a boundary between our Local Cloud of interstellar gas and another cloud of a very hot and turbulent gas.”

Energetic neutral atoms, registered by IBEX detectors, are born out of ions (protons) speeding from the very hot Local Bubble when they exchange charge with the relatively cool atoms “evaporating” from the Local Interstellar Cloud. The newly created ENA have no electrical charge and therefore can dash freely in straight lines from their birth site, oblivious of the impeding magnetic fields. Some of them may reach Earth orbit and be detected by IBEX. “Had the Ribbon ENA been created at the boundaries of the heliosphere, their birth site would be relatively nearby, within just a couple of hundreds of astronomical units,” explains Dr Andrzej Czechowski from SRC PAS, one of the co-authors of the paper. “According to our hypothesis, they are born much, much farther away.”

The team of Polish and US scientists suggests that the Ribbon ENA are born by electrical charge exchange between the atoms which “evaporate” from the Local Interstellar Cloud into the nearby Local Bubble of a very hot and fully ionized gas. The Local Bubble is probably a remnant of a series of supernova explosions that occurred a few million years ago and thus is not only very hot (at least million degree Kelvin), but also turbulent. The protons in the Local Bubble nearby to the boundary with the Local Cloud snatch electrons from the neutral atoms and run away in all directions, some of them reaching IBEX.

“If our hypothesis is correct, then we are catching atoms that originate from an interstellar cloud that is different from ours,” says Dr. Maciej Bzowski, co-investigator of the mission and head of the Polish IBEX team. But since the creation of such ENA atoms is occurring throughout the entire boundary layer between the clouds, why do we see the Ribbon? “It’s a purely geometrical effect, which we observe because the Sun is presently just in the right place, within a thousand of astronomical units from the cloud boundary,” explains Grzedzielski. “If the cloud-cloud boundary is flat, or better slightly extruded towards the Sun, then it appears the thinnest towards the center of the Ribbon and thicker at the sides, right where we see the edge of the Ribbon. If we were farther away from the boundary, we would see no Ribbon, because all the ENAs would be re-ionized and dispersed in the intervening gas of the Local Cloud.”

The model developed by the Polish-US team suggests that the boundary between the Local Cloud and the Local Bubble might be not within a few light years from the Sun, as it was believed earlier, but within just a thousand of astronomical units, a thousand-fold closer. This might mean that the Solar System could enter the million-degree Local Bubble cloud as early as the next century. “Nothing unusual, the Sun frequently traverses various clouds of interstellar gas during its galactic journey,” comments Grzedzielski. Such clouds are of very low density, much lower than the best vacuum obtained in Earth labs. Once in, the heliosphere will reform and may shrink a little, the level of cosmic radiation entering the magnetosphere may rise a bit, but nothing more. “Perhaps future generations will have to learn how to better harden their space hardware against stronger radiation,” suggests Grzedzielski.