The Coso ‘Spark plug’ is one of the most interesting and anomalous artifacts ever discovered.

Its story begins one February morning in 1961, when the owners of a gem shop were out looking for new exhibits in the Coso Mountains of Eastern California. Little did they know that, among the geodes they collected was a controversial relic that would challenge what we knew about our planet’s past.

The next day, they started cutting into the rocks, hoping they contained valuable crystals inside. Instead, they discovered that one of the geodes contained what appeared to be a mechanical device resembling a spark plug.

The device itself consisted of a porcelain cylinder circled by rings of copper. X-ray-analysis showed a magnetic rod and a metal spring were housed inside the cylinder. The rock also contained a soft, white substance that was never identified. 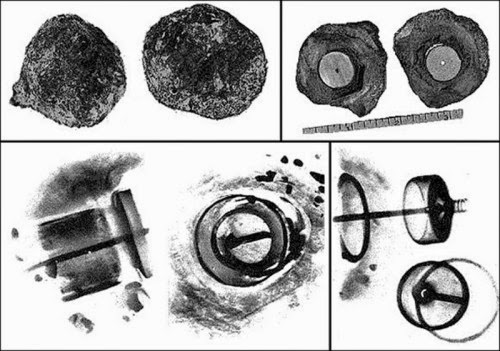 But the most puzzling aspect of this find was the age of the geode, which was determined by analyzing the stratum in which it was found as well as the presence of a concretion of marine animal fossils on its surface. Geologists determined it could be as old as 500,000 years.

All evidence seemed to suggest the Coso artifact and the white substance covering it had spent a long time submerged under seawater. But what civilization had been advanced enough to engineer and then lose it? Was it even an earthly civilization? Turning to mainstream science for answers would be in vain. 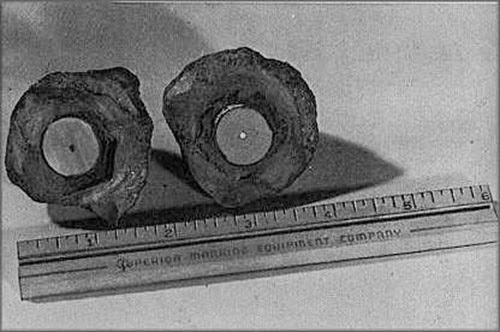 Adepts of creationism have cited this oopart (out of place artifact) as evidence for the existence of an advanced pre-flood civilization while atheists have always dismissed it as a hoax.

Unfortunately, this disputed relic was not subjected to rigorous testing and there’s little chance it will ever become the central point of unbiased scientific analysis. It simply vanished in 1969 and hasn’t turned up ever since.

The Coso artifact and other equally-intriguing ooparts will silently fuel conspiracy theories from the obscure comfort as a centerpiece in someone’s private collection.