That is a very important distinction and a lesson learned in 2016 that must not ever be forgotten.

Populism is described as “a political doctrine that stems from a viewpoint of a struggle between the populace and a ruling faction.” Nationalism on the other hand is defined as “patriotic feeling, principles, or efforts.”

With the passing of the Brexit referendum in the UK which caused David Cameron, the Prime Minister, to resign, the election of Donald Trump in the U.S. as a repudiation of globalist leader Barack Obama, the Italian referendum which caused the Italian Prime Minister Matteo Renzi to resign, and the recent announcement by French President Francois Hollande that he will not be seeking re-election, there is one “global elite” leader left standing… Angela Merkel, who has suffered some major losses herself in Germany.

The image above, minus the X marks on their heads, has been going viral on social media, with messages like “Three pro-EU globalists down, one more pro-EU globalist to go,” and “four down, Merkel to go”, according to the Independent UK, in an articleheadlined “Last world leader standing: The photo that shows just how much the world has changed in 2016.”

Each of these leaders have been seen as betrayers by the populists in their respective countries, putting the good of others above the good of those they were elected to represent, and each have been repudiated in elections and referendums in 2016 by the very people they have betrayed with their globalist policies.

Jobs, manufacturing, the economy, all sacrificed by the five globalists above in pursuit of their “New World Order,” and all but one will be gone in 2017, with Angela Merkel seeking a fourth term, despite a “historic loss” in the Berlin state election in September, which many believe was a backlash against her open immigration policies.

Before the Brexit vote, the media hyperventilated and claimed the whole world and markets would be “thrown in turmoil,” in an attempt to influence the referendum results. Headlines from before the referendum included “Brexit ‘would have huge economic impact and spark turmoil in global markets’ from the Daily Mail and “Brexit would create turmoil and damage Irish trade,” from the Irish Times. One of the most amusing headlines came from the UK Mirror at the time, who declared “Brexit could end Britain’s hopes of hosting another World Cup or Olympics.”

The same hyperbolic headlines proceeded Italy’s recent referendum, with promising chaos if the “No” vote one and Renzi resigns.

The same type of howling preceded the U.S. elections with dire warnings of what would happen if Donald Trump beat globalist Hillary Clinton, where CNN headlined on November 6 with “US election 2016: this is the global market turmoil that would be triggered by a Donald Trump victory,” to which not only didn’t happen, but just the opposite occurred, as one day after the election, markets rallied and stocks soared, with increases still being seen as CNBC reports today that “Stocks have been on a rip-roaring rally since the U.S. election.”

One pattern here is that in every case, the mainstream media had attempted to influence the outcome, always in favor of the globalists, but the more important pattern is that the populace in each instance in their respective countries….. ignored them. Ignored the consistent flow of skewed polls claiming the “populist” candidate or position had no chance, ignored the constant negative stories being slammed out daily, in many case multiple times a day, against the candidate or position the media didn’t favor.

While polling over the decades has shown an increase of distrust toward the mainstream media, until 2016, they were still able to influence primaries, elections, referendums and votes……. those days are gone, and that is why the global elite are panicking. 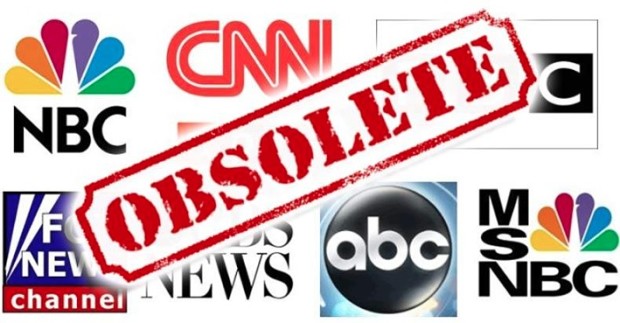 Former U.S. VP Dick Cheney recently sat down with Former Secretary of Defense Leon Panetta and CNN’s Barbara Starr at the Reagan Library, and said something horrifying to the mainstream media and the globalists.

Love him or hate him…… the truth is the truth.

Starr asked Cheney about the language of President-elect Trump’s tweets and after answering her Cheney stated “I think one of the reasons people get so concerned about the tweets is it is sort of a way around the press. He doesn’t have to rely upon, uh, rely upon — this is the modern era, modern technology. He’s at the point where we don’t need you guys anymore.”

The laughter from the audience is clearly heard… but nothing from CNN’s Starr, because those are the words the global elite and the MSM are all terrified of… because they are the truth.

The mainstream media and their “fake news,” along with their “fake polls,” using skewed demographics intended to create an illusion meant to influence the public, has failed, and with it they took the last thing propping up globalism and touting it as the “way forward,” in an attempt to create a New World Order.

The term “leader of the free world” has often been used to describe the United States and more commonly the U.S. President of the United States, and having a populist U.S. President is a tremendous blow to globalists across the world, so it is no coincidence that after an election to where the ‘populist’ candidate won, Clinton has teamed up with Green Party candidate Jill Stein to petition for recounts in the three states that Trump flipped, which if successful would hand the election to the globalist candidate Hillary Clinton.

It is also no coincidence that organized protests, funded by globalist George Soros, have been seen across America after the election or that we are seeing dire warnings of “bloody Friday,” with reports warning that ISIS could attack on inauguration day.

11 Reasons Why Investing And Living In Sweden Is So Popular