A Welsh rapper has recently shared a photo of a swarm of unusual creatures resembling tiny humanoids with wings on top. According to him, the beings are nothing else but the mythological fairies.

Often cited in British folklore, the fairies are a remarkable appearance that had the imagination of many stretch to the point where they started to have faith in their existence. Are these mythological creatures just a pinch of fantasy that has sprouted from our imagination, or is it possible that our ancestors actually encountered the little flying wonders?

Many things on our planet don’t add up, and although numerous people accept to sacrifice the answers at the cost of comfort offered by society, there are still countless explorers who aim to debunk the timeworn myths recorded throughout history.

Such is the case of the fairy – a legendary being of folklore with magic powers and a strong affinity for humans. They appear in both oral and written literature and tend to have no boundaries when it comes to their fame. From the ‘Sanskrit Gandharva’ to the nymphs of Greek mythology and Homer, to the characters of the Samoans, of the Arctic people and various indigenous Americans, the fairies appear to be a consistent presence throughout the entire globe.

If you consider them to be just a fabled presence, you might want to rethink the possibility since various proof attesting their existence has surfaced on the internet in recent years, with the most recent case being that of John Rutledge, a Welsh rapper who photographed these mythical beings in the British countryside. 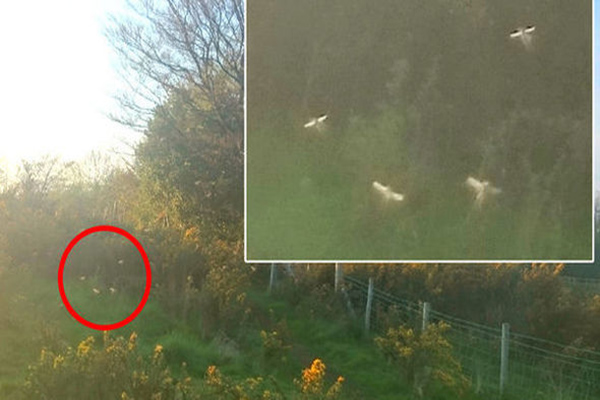 Rutledge claims he took a photo of the field near Newbridge, Wales as the sun was just rising and illuminating this beautiful summer morning. He didn’t see anything unusual at first, but after checking on the pictures, he noticed these flying beings that strongly resemble a swarm of tiny humanoids.

At a closer look, the beings appear to be no larger than 4 centimeters. 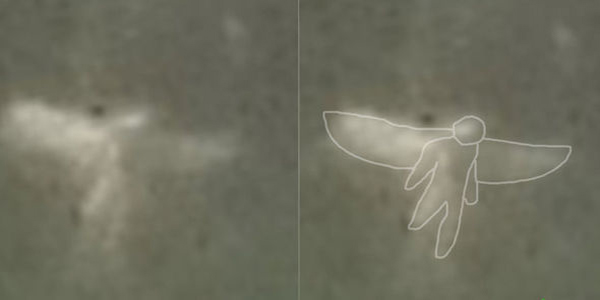 They possess traits that are also found in humans: small membranes, a defined head, and a pair of wings on top. Although skeptics consider the lilliputians to be just a bunch of oversized insects, the Goldie Lookin Chain rapper claims they are definitely the mythological winged beings we call fairies:

It’s amazing! When we checked the images we couldn’t believe our eyes,” he said. “Ever since childhood I’ve wanted to witness a paranormal event. The last thing I expected was a winged entity in a wood in South Wales, but there it is, smack bang in your face – it’s solid evidence.

Although he may be a little bit too overconfident of his find, the image captured add up to the other evidence of fairies that had been made public in the past years. Furthermore, the rapper expressed his excitement stating that:

There are some things in the universe that may well go without answers, but I think we’ve just put one of the world’s biggest mysteries to bed. There are definitely fairies at the bottom of the garden, he concluded.

For some, conclusive evidence only appears in the form of a fairy trapped in a jar, but since that hasn’t happened yet, we’ll have to be thankful for the intriguing photo that adds to the already existing evidence of these winged creatures.

In 2015, a man contacted the host of ‘The Mystic Menagerie, a UK-based podcast dealing in alternative discoveries, presenting them with hi-res photos of skeletal remains of an alleged fairy. Remnants of the creature were found in Cornwall, inside a birdcage for exotic species. It incorporates a rib cage, spine and a tiny head that overall look like a humanoid creature that hasn’t been recognized by modern-day science. Linking the two reports indicate that such legendary beings could reside on our planet after all. It appears that Britain is a hotbed for fairies, but any other remote places across the globe should be taken into consideration. There’s so much we don’t know about this planet we call home, and in our ignorance, we tend to bypass most evidence of the unusual or unexplained.

Whatever the case, it remains for each of us to process the information in order to form our own opinions of things. Although it could be a swarm of well-fed insects, the possibility of them being in fact a bunch of humanoid creatures is not to be neglected. What do you think to be the case?